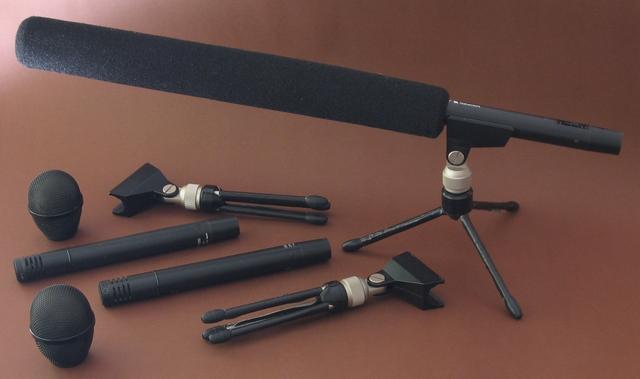 I bought three of these microphones (CP1 & CP2 capsules with CM300 backends), and two CP4 shotgun capsules, way back when I started video production in the early 1990s, and have been using them ever since.  They cost me $1800 at the time, and have proved to be dependable and do a very good job.

Before I started working for myself, I'd worked in other people's studios and had really grown to hate the lack of interest in good sound equipment.  From using awful mikes, trying to use a group of mikes with radically different audio characteristics together, only having one mike to cover everything, mikes with very short leads ending in phone jacks, horrible noises getting into unbalanced lines, etc.  And when I bought my first camera, it came with a truly dreadful mike.  So purchasing decent microphones was at the top of the “to do” list.  Fortunately one of the local audio/video dealers understood what I wanted, and sold me these.

What I ended up with was three virtually identical mikes, with omni- and uni-directional capsules, and a couple of super-directional shotgun capsules.  With these mikes, the interchangeable capsules screw into the backend, giving you a kit that can be assembled for the type of pick-up pattern you need.

They were only battery powered, but that didn't bother me at the time, since my camera had no phantom power supply, though having to deal with batteries was a nuisance.  More recently, I modified the CM300 mike backends to run off phantom power, to carry on using them with other equipment, rather than replace the mikes.  I've never really cared for phantom power (with any connection gremlins you get horrible crackles and crunches, some mixers produce nasty hums when their phantom power is used, few mixers let you switch phantom power to each input individually, etc.), but it is a useful thing to have (when it's working well).

I've always liked the sound quality of the mikes, and they've proved good at being used for close-up and distant-miking.  The three mikes have virtually the same audio characteristics, so using them for stereo or group recordings means that you don't notice sonic oddities between them.

Being tube-shaped rather than conical mike meant that the mikes could be clamped in any direction without it sliding out of the mike holder.

Having a low-impedance transformer-coupled output is good for noise immunity over long lines, and has been compatible with everything I've used them with.

Being self-powered has meant that I could use them with any equipment with a mike input.

The windscreen/pop-filters for the omni and uni capsules is a coarse wiremesh backed by a fine wiremesh screen, so there's no decaying foam to worry about.

They have a switchable 10 dB pad in the head, before the preamp, so you use them in some extremely loud situations with distortion occurring.  Though having to unscrew the capsule to reach the switch is a bit of an inconvenience.

The use of a special battery was a bit annoying, at first.  They weren't cheap, though did last for a very long time.  Later, the battery became unavailable, so even more annoying, and I had to make up batteries by taping button cells together.  Not being phantom powerable is a bit limiting, but it was very easy to convert them.

The windscreen/pop-filters soon became loose, and were prone to sliding off.  I've had to glue the plastic framework back together a few times, but the rubber grippy strips that's supposed to hold them on don't grip tightly enough, and are too slippery.  The foam windscreen cover for the shotgun mike eventually deteriorated after about twenty years, so I've got to find a replacement for it.  I was fortunate to discover this before it dissolved into goo and got into the mikes.  So if you've got boxed up shotgun capsules, you want to carefully inspect them.

The box they come in wasn't set up very conveniently.  You have to remove the wind/pop filter to put the mike away, leading to the filter becoming sloppy very quickly.  It would have been better to be able to put the mike away still fully assembled.  These days I keep them in a plastic toolbox that is big enough for that, and to hold various accessories.

The shotgun mike is very long, much longer than the usual mike blimp windcages, so I've never bought one for it.  I'm in two minds as to whether to try and find a super-long one, or buy a newer mike that fits the usual windcages.  I've had to use them on a few occasions where the original foam windsock just wasn't good enough to stop wind noise.

The mikes are quite narrow, so need a special clamp to hold them, or need packing around them to fit larger ones.

The mikes have no anti-shock mounting, so handling noise is very noticeable (although they're not meant to be hand-held mikes).  Likewise for noise mechanically transmitted through the stand.  I've made shockmounts, and bought third-party generic ones to deal with that issue.

If you have to move a directional mike around, such as one mounted on a camera, or using a roving mike, you do hear the accoustics of the background sound change quite noticeably.  All directional mikes suffer from that, but it was surprisingly prominent with these mikes.

When I first bought my mikes, I tested one mike first, bought three when I was happy with it, and bought a couple of shotgun capsules.  One of the shotgun capsules was a bit naff, so I sent it back for a replacement.  The supplier sent me back my original mike as the replacement (there was a telltale internal scratch, and it came back in a box with my gaffer tape on it).  I wasn't pleased by the attitude of returned rejected goods being fobbed off unto another customer (the same customer, in this instance).

I suppose the ultimate comment about them is that I've used them for almost thirty years, and not wanted to replace them.  Over that time I've compared them with other mikes, and have never been displeased by mine's sound.