Review of a Canon PowerShot A520 digital still camera 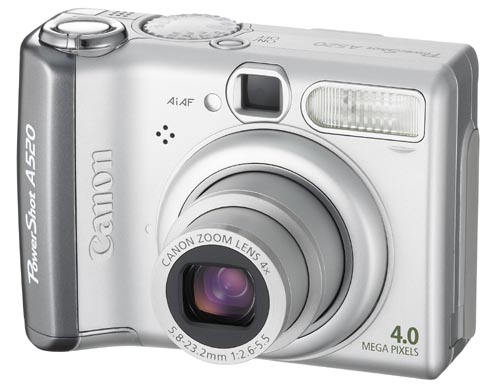 Just some brief notes while I get around to writing this properly:  It takes rather nice pictures for a medium-priced compact digital camera, so long as you don't want enlargements.  Some pictures taken by it are on display in the photography section of my website.

It comes with a 16 meg MMC memory card, which is woefully inadequate for a camera with this one's resolution.  It also supports use of SD cards.  Whichever type you use, you'll want to get something like a 256 meg card, at least, if you'd like to store more than just a few pictures at full resolution before you print or save them off.  I bought a couple of 1 gig cards, they easily hold several hundred photos, each.  I don't know if it can use larger cards, I couldn't find any specifications for the camera's maximum memory capacity, and it starts to get slow to save pictures once you get around 700 megs on these cards.

It runs off a couple of AA batteries, I'm using rechargeable NiMH ones, and they last quite a long time (though I bought higher power rated batteries than most of the AA cells I see at the shops).  It can also run off an external power source, but, unlike my Polaroid PDC-1320 digital still camera, this camera doesn't come supplied with one.

The flash automatically tracks between wide or narrow lighting depending on the zoom.  But the zoom only zooms in a few increments, it's not a true variable zoom as on most video cameras.  You're still stuck with pacing back and forth to get your framing right.

There's an over-the-lens viewfinder which tracks with the zoom, though it has awful optics.  Alternatively, if you don't mind chewing through your batteries, and if the ambient light's not too bright, you can use the LCD screen on the back.

The lens isn't particularly robust, it's a pop-out mechanism that's got a bit of a wobble to it, and it's going to get a bad knock at some time.  There's a built in little set of shutters at the end to try and protect the lens from damage, but they're not strong enough for that, and they often jam instead of opening.  I frequently have to flick the lens barrel with my finger to get the shutters to unstick and finish opening, that isn't going to do it any good.

The camera is fully automatic, but with various presets, partial and full manual override.  Though you have to wade through cumbersome menus to do anything manually.  But, at least, you get to do things that real cameras can do, like taking very long exposures (only up to a few seconds, though).  Unfortunately, the range of optical adjustments are rather limited (small zoom range, small iris range), it relies on playing with the exposure time for wider control of exposure.  And wading through menus where you could otherwise have twisted a ring on the lens is a major time waster, not to mention the nuisance factor of some things resetting when you turn off the camera.

No, manual setting of a camera is not a terribly slow thing to do, that's only the case when the camera is designed badly.  It takes me just a few moments to focus a lens and set the aperture to suit the light and my current shutter speed on a proper manual camera.  That sort of thing only takes slightly more time to do than the automatic features on this camera take to complete, but much less time than what you have to do to manually do settings on this camera (turn function wheel, press a menu button, press more buttons to go through menus, press buttons to toggle functions, press up/down buttons to change focus or exposure, etc.).

The delays, though, are the biggest killers with digital cameras.  If you want to take candid photos, or quick ones, forget about it.  First you've got to wake the camera up, then it's got to set itself (focus and exposure), then after a variable delay (when you press the shutter release) it'll take the photo.  You won't get somebody shaking hands, or your kids smiling for the camera, because the moment's been and gone before the camera took the picture.  You can't really anticipate and take the picture early, as the delay isn't fixed, and it's too long to work around.  And if you decide to wait a while for a second opportunity, or try to preset the camera before you take your pictures, there's a good chance that the camera will go to sleep while you're waiting.

Like a lot of digital cameras, it's image aspect ratio (width versus height) is not the same as 35 mm cameras.  This means that when you print photos, either they're a non-standard size (which don't fit into photo frames), or you blow up the picture to fill normal photo print paper, and something disappears off the edges of the paper.  Not only does that look bad, you're stuck with photo printers just doing that to the centre of your picture, or having to manually pick which part of the picture to keep, or doing prints with abnormal white borders on the left and right of the shot and none on the top and bottom.  Or taking photos with lots of wasted space to accomodate enlarging the wrong picture size to suit the paper (meaning you can no-longer frame things properly).  Or you switch to a postcard mode which masks off a bit of the top and bottom, drops the resolution down, and doesn't let you play with many settings on the camera that you might want to use.

The resolution's fine for making (nearly) traditional 6″ by 4″ prints (you can print on 6″ by 4″ paper, and put up with 7 mm white borders on the left and right of the paper, or blow up the image to fill the paper and lose some off the top and bottom edges, or crop it to 5.5″ by 4″ to print the full image across the paper).

It's still quite fine for 8″ by 6″ prints (which are almost the same dimensions as the camera images), but you will notice that things like faces in the picture are starting to look soft, albeit the edges around the head are artificially crispened trying to fake a higher resolution than the image really is.  It's a strange mix of soft resolution and edge over-enhancement that I don't like about digital photography and printing, something that you don't get with completely optical systems.  At least the local Fuji printing mini lab produced those kind of results, on photographic paper—these aren't print tests that I've done using home printers, and they were done with pictures taking with reasonable outdoor lighting conditions around the middle of the day.

It's really starting to show its resolution limitations when you blow up to 10″ by 8″ (which end up with a narrow white border top and bottom, of about 5 mm each, if you don't enlarge past the other edges of the paper).

And you're pushing your luck, resolution-wise, to make a 12″ by 8″ print (which gets rather fat white borders on the left and right of approx 1.5 cm each, if you don't enlarge past the other edges of the paper).

(Sorry for the mix of Imperial and Metric measurements.  I'm a metric person, and that's the only scheme I'm familar with, but photos are traditional described in inches.  You can do what I do—use a ruler with both systems marked on it.)

The other big killer is the much more limited contrast ratio and colour gamut that CCD (and other video) imaging devices have compared against optical photography.  They just don't have the range.  And, unlike with a film camera, you can't just change films to change those aspects, they're an immutable part of the camera's characteristics.

All in all, it's quite a pain, and there's a number of really stupid design issues with this camera by Canon.